There’s a long history of animals in ketubah art, both as symbols and as ornament. You’ve got your lions, bears, deer, doves, fish, as well as all the symbols on the zodiac (only backwards). Roosters make occasional appearances as do chickens and peacocks and once I even found a mermaid! I’m devoting a number of blogs to these animals beginning with fish, both because I love the shape and color of fish and because it’s such an important Jewish food item (think gefilte). 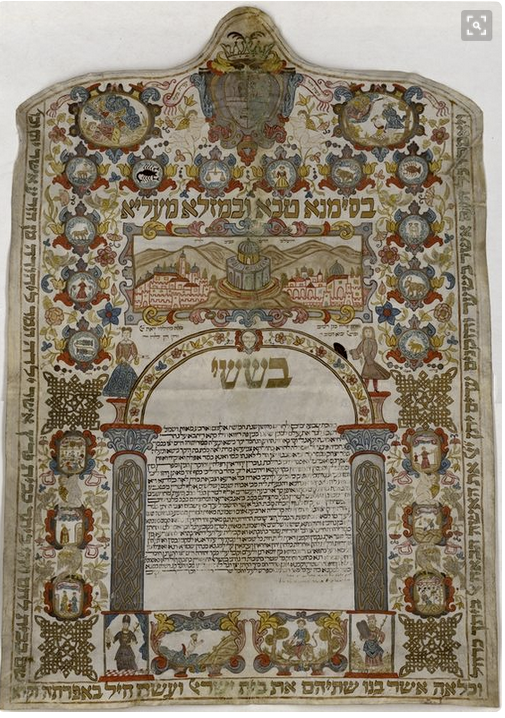 Fish lay a lot of eggs! So what better fertility symbol? And what better place than on a ketubah when you might be thinking about starting a family.  But fish are not just about caviar.  Pisces, with its two fish, falls in the Hebrew month of Adar when we celebrate Purim, that festival of happiness and good fortune (the Jews were saved from destruction).  So having fish on your ketubah has multiple meanings. Here are some historical examples as well as some of my own. Although most of these examples have a pair of fish, I say you can’t have too many on a ketubah,  and I was able to find one with four.

I love the fish in this ketubah from Tunesia with the Hamsa inbetween. Impressive what you can make out of just 2 colors. 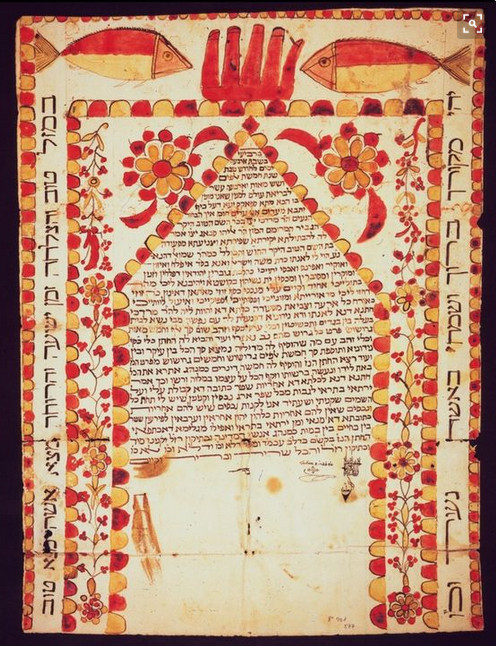 And these 4 fish in ketubahs from Calcutta, India. Similar designs, but fish with decidedly different personalities.

The same basic design is getting more sophisticated with the fish in this example from Singapore. Looks like they might be able to walk across a street soon. 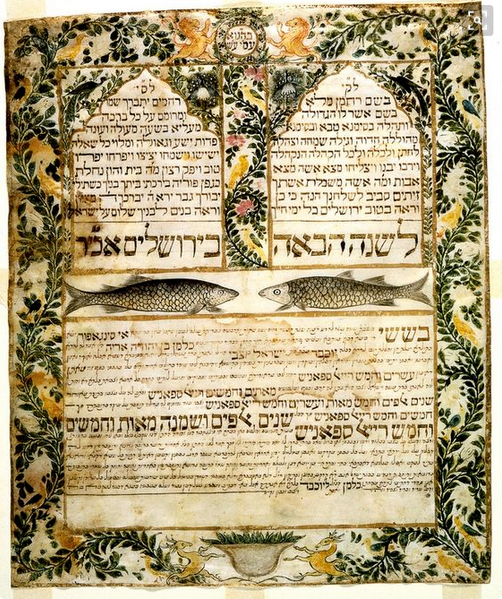 And another from Singapore that I couldn’t resist with its three pink goldfish. 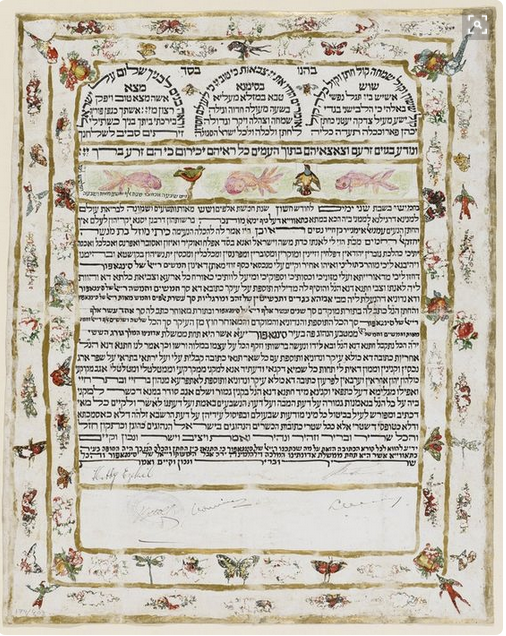 I was surprised that this ketubah the country of Georgia was done in 1947, given its primitive style. I love how the smaller fish seems born from the top of the larger one, like Venus from the head of Zeus. 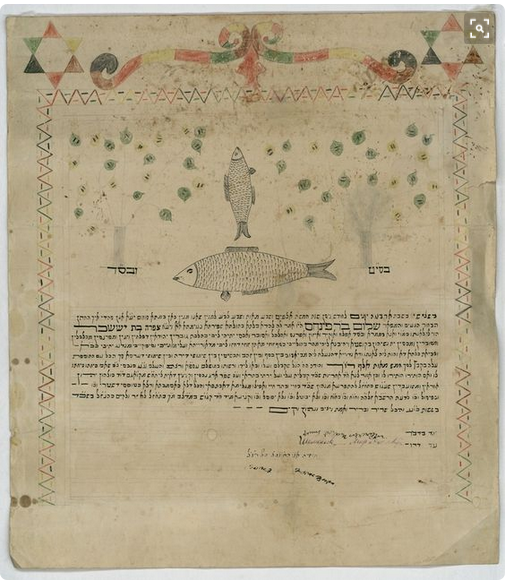 Somewhat incongruously set on top of  an otherwise architectural design in this Viennese ketubah, these fish seem to be leaping over a pedestal like trained dolphins. The Hebrew on either side of them reads: Good luck fish. Or is it Good luck, fish! 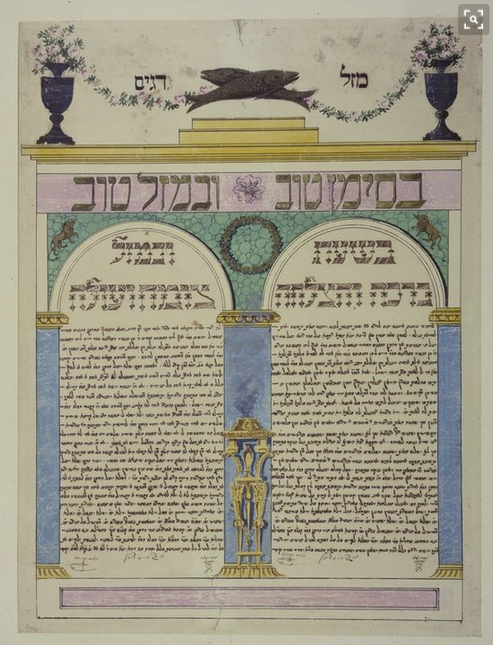 And here’s the ketubah I found from Ancona, Italy with 4 fish forming a frame around a Hebrew quotation for good luck. 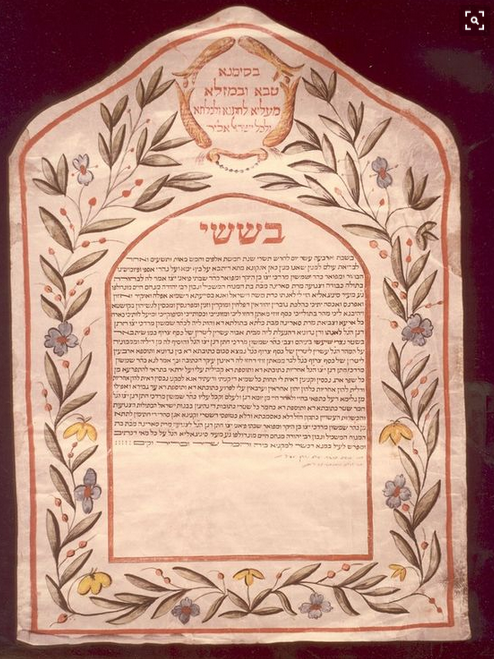 And a few of my own ketubot with fish in the design. In the first example, the groom’s family was originally from Cochin, India and the couple wanted to honor that beautiful ketubah tradition. 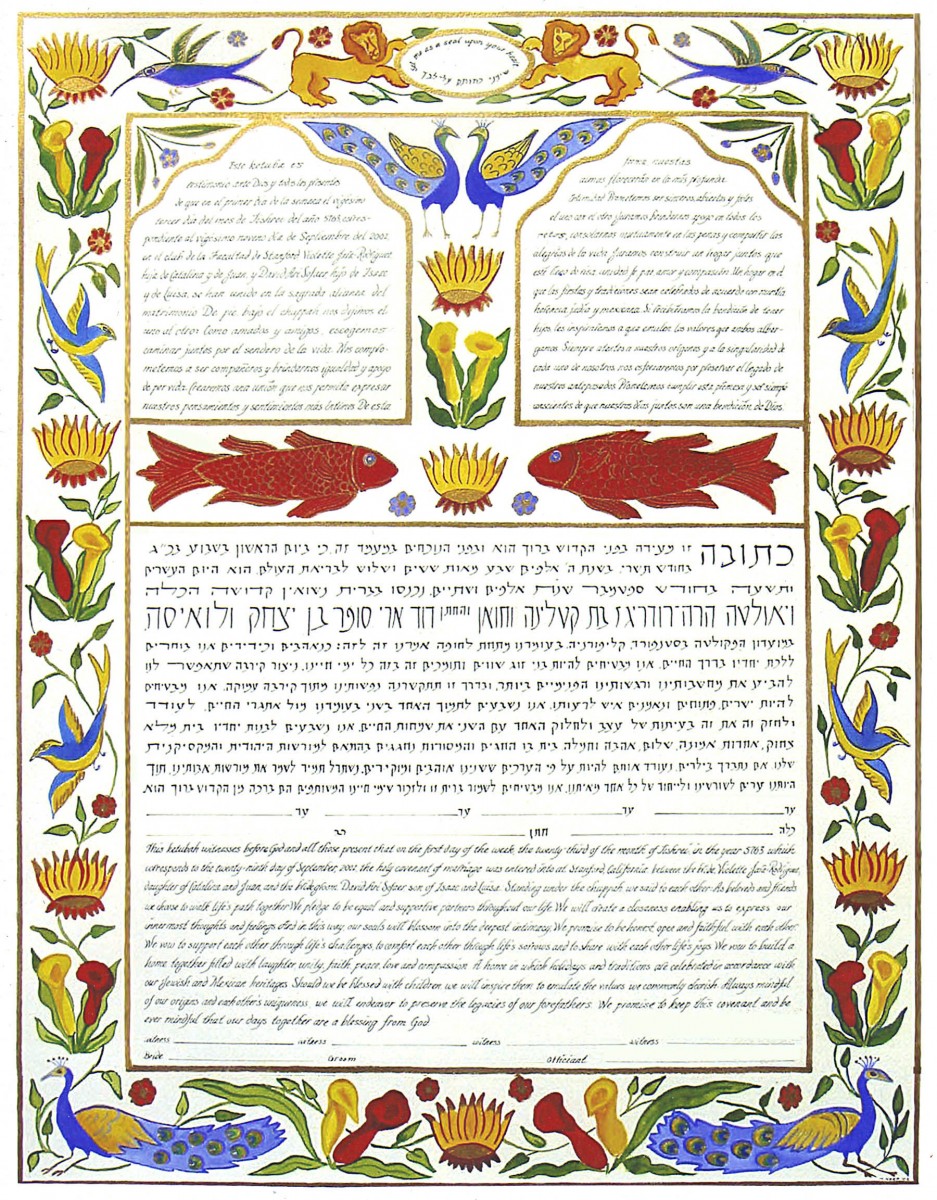 Cochin Custom Ketubah based on historical examples from Cochin, India with two goldfish 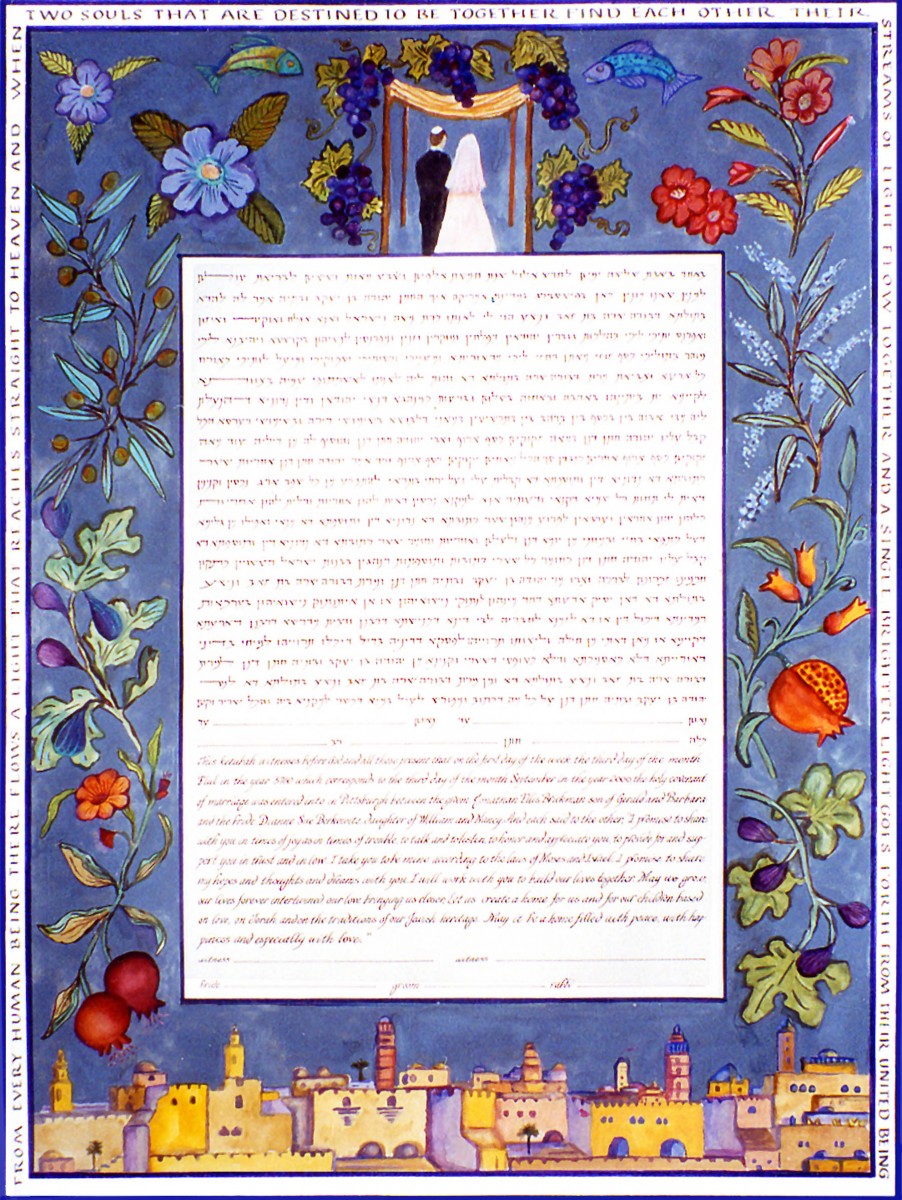 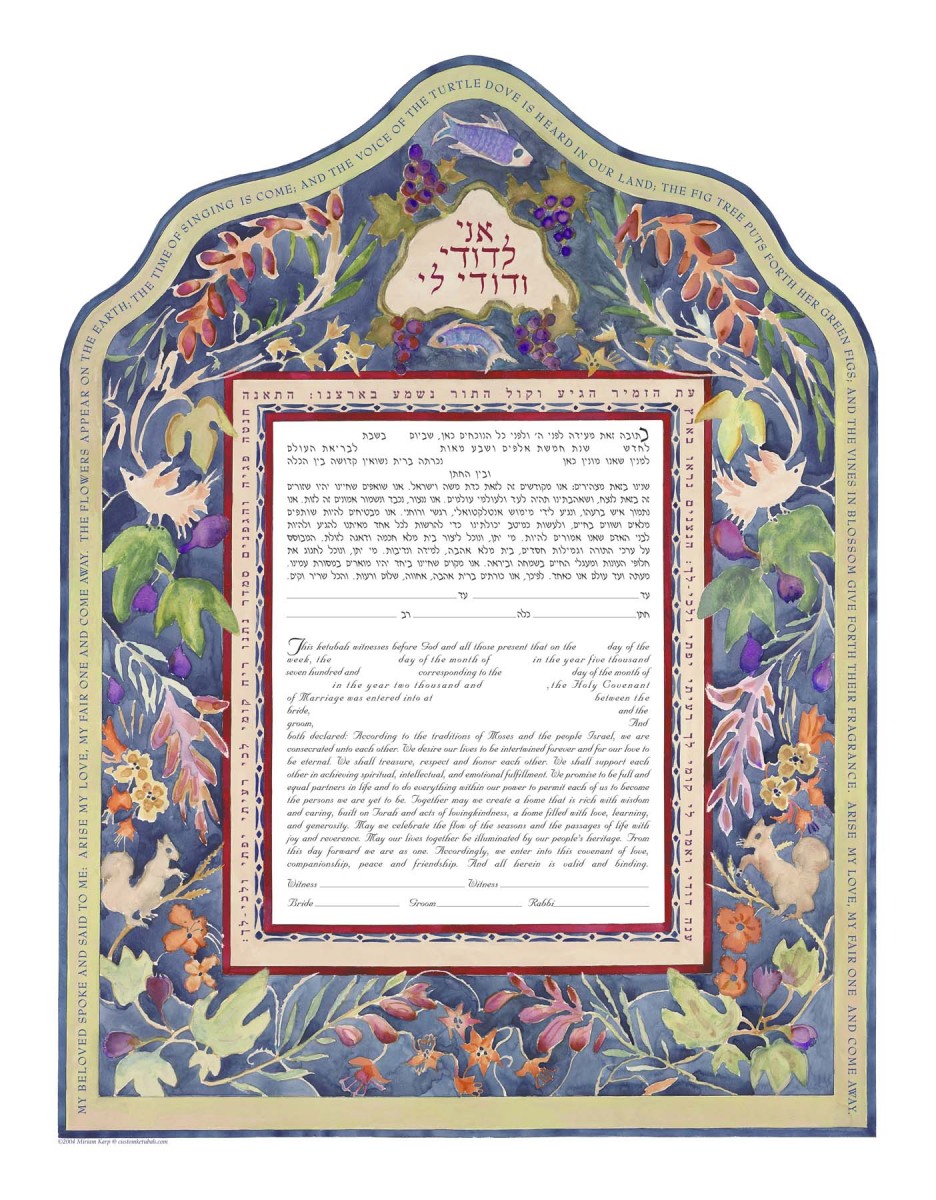 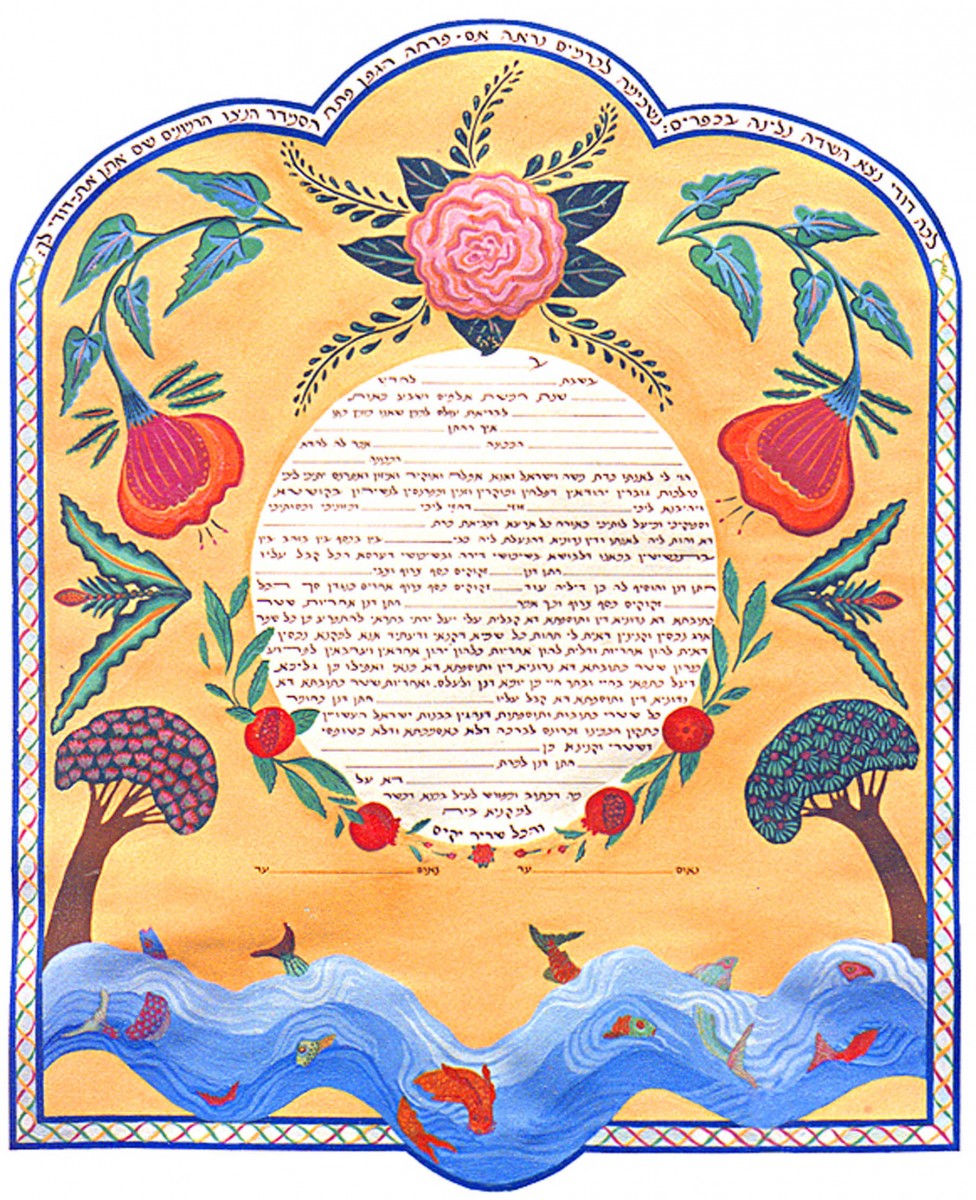 Leaping Fish Custom Ketubah in the style of Czechoslovakian pottery