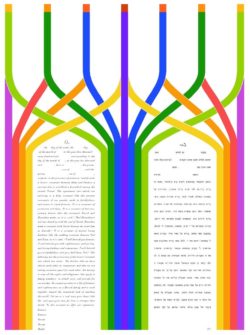 Same sex marriages have been legal in all 50 states for 7 months now.  Obergefell v. Hodges found that  the fundamental right to marry is guaranteed to same sex couples under the Due Process and the Equal Protection Clauses of the 14th Amendment.  I can finally do same sex ketubahs for all of my gay and lesbian clients no matter where they live! For years I’d been doing same sex ketubahs for lesbian and gay couples traveling to get married in states where it was legal. Before that I did commitment ceremony ketubahs for gay and lesbian couples with special language differentiating them from a traditional ketubah. I even got the occasional call from someone trying to bully me to stop offering my work to same sex couples. That, of course, made me all the more determined to offer ketubahs to gays and lesbians.

I’ve been making ketubah art off and on for over 30 years.  Some of the most meaningful weddings I’ve been privileged to play a part in have been between gay and lesbian couples. They are couples who have lived together for decades,  often enduring discrimination from many quarters,  and loving each other in spite of the larger society.

When I looked at my ketubah images, there were so many that featured a bride and groom: under the chuppah, dancing, embracing, around a table with children, for example. That obviously had to change. So I went back and redid all the Giclée prints where there was a bride and a groom. I’m very pleased to have an array of ketubah prints for same sex marriages now. Each of these prints is available with texts for same sex weddings and quotations have been modified for gay and lesbian weddings where needed.