In a  Jewish wedding, there is a ketubah signing ceremony before the actual wedding where two witnesses sign the marriage contract. It usually takes place in a private room attended by the officiant, the wedding couple, the witnesses, close family and possibly a few dear friends. It’s considered a honor to be included in the ketubah signing ceremony.

In an Orthodox Jewish wedding, two witnesses unrelated by blood to the bride or groom, are chosen to sign the ketubah with their Hebrew names, thus completing it and making it a kosher, legal document. The rabbi might also require that the two witnesses be shomer shabbat (observe the Sabbath) and frequently Orthodox rabbis will also sign the ketubah with their Hebrew names to insure that there are shomer shabbat signatures. The bride and groom don’t sign the ketubah under the Aramaic text in an Orthodox wedding, although they may sign under the English text. 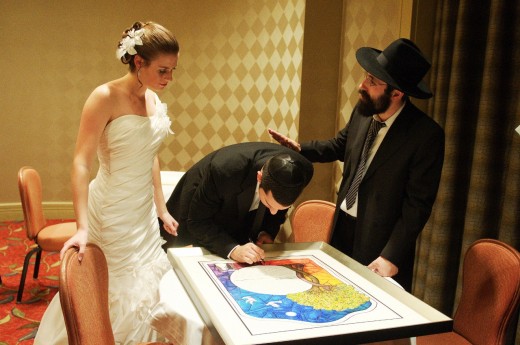 The rules change for non-Orthodox weddings. In a Conservative ketubah signing, there are still two lines for witnesses unrelated to the wedding couple and many people include extra lines for the rabbi and/or cantor to sign under the Hebrew. The bride and groom can also sign their Hebrew names as well as their English ones. Below is an example of what it might look like. The top lines are for the two witnesses (naoum ayd), the middle line is for the groom and bride (chatan, kallah) and the last for the rabbi (rav).

Here’s where you need to be careful. When was the last time you needed to sign your name in Hebrew? Your Bar/Bat Mitzvah? Never? So you need to write it out and practice. Have your witnesses write out their names and practice signing too. And make sure you all know which line to sign on.

Everyone’s more than a little nervous/excited at a wedding. I was one of the witnesses for a good friend at her Conservative wedding. I signed my name in Hebrew and passed the pen to the second witness who started to sign her name on the bride’s line. The rabbi practically tackled her, knocking the pen out of her hand. When she recovered and signed on the correct line, it was with a very shaky signature.

Many years ago I got a panicked call from a bride a couple of weeks after her wedding. One of the witnesses had an index card with his name written out in Hebrew. Great idea, right? When he got to the ketubah signing ceremony he dutifully copied the letters on to the ketubah not realizing that he was holding his card upside down! Not only that, he signed on the groom’s line! Thank goodness for single-edged razor blades. I scraped out his signature and the bride got to marry the right man.

Most of the time it all goes as planned. Below is an example of a ketubah signing ceremony that went off perfectly– a hitch without a hitch. 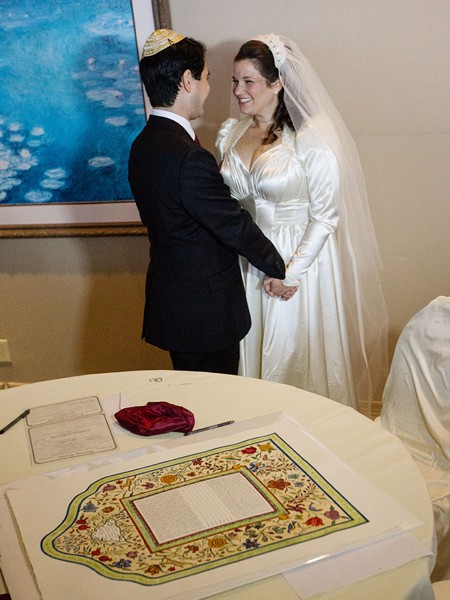